How to Enjoy a Poem: Happy Poetry Month

Happy National Poetry Month! We’re almost at the half-way point~I was graciously interviewed by Lidy Wilks of iheartallstories to celebrate the 30 days of Poetry Month. Enjoy and hope you learn something new about me~

What was the first poem you’ve ever read?
All of the Mother Goose nursery rhymes were my favorites when I was a preschooler and when I became school age, I loved hearing the pounding hoof beats in Robert Louis Stevenson’s poems,—his Child’s Garden of Verses especially. I’m an auditory learner, I loved his rhythms and rhymes, plus there was usually strong conflict in his work. I also couldn’t get enough of Walt Whitman’s extended metaphor about Lincoln’s assassination in “O, Captain! My Captain!” I, too, wanted to express something grand and meaningful. I first got my chance my sophomore year of high school when I won second place in the annual poetry contest. I wrote a three page poem about the epic fight between King Arthur and Sir Mordred. After trying the next year and not winning any more awards, I stopped writing poetry until my mid-twenties when a friend invited me to an open mic. I felt that what I wrote could have been better, but I didn’t know what I needed to do get better.

How has poetry influenced you as a person? Or as a writer?
Now fast forward to nine years ago when I first started sending my short stories and essays out to various publication markets. I didn’t get any takers for these pieces and I was getting tired of all of the rejections. Then one of my writing teachers suggested reading and writing poetry to become a stronger fiction or memoir writer. I could do this! After all, I had written poetry before. The third poem I wrote after my nineteen year hiatus won honorable mention in NC State’s annual poetry contest. Wow! Maybe I needed to keep doing this poetry thing. It was called “Ghostcards” and it was about the dual hanging deaths of two 14-year-old African American boys in Shubuta, Mississippi in 1942. Langston Hughes had portrayed the boys’ fate in “Bitter River” and I wanted to present my own version using the color gray throughout the poem. One night, the name “Ghostcards” came to me in a dream and wouldn’t let me go until I had written the poem. Many of my poems emerge similarly, while others come from the newspaper, random encounters, personal experiences or strange family behaviors.

I’m almost finished with my new poetry collection, Heroes without Capes. Within this collection of dramatic monologues and narrative poems, you’ll meet some of the famous and infamous figures from history, myth and pop culture who show varying degrees of heroism and loneliness. Boba Fett is a recovering alcoholic working hard at changing the script of his past. “Holding the door for an old man in a Braves hat, /I keep my eye out for movement among the parking lot pines/and mutter a tiny prayer while backing out by the Drive-Thru. /And an even bigger one when I take a bite/to drive east into the sun. /Telling myself this ketchup on my armor is real, /even if the past isn’t.” While all the Predator wants to do is buy beef at Walmart. “Ring butcher bell, and Charlie comes right away./What wonderful service! And fills up cart. /Few ground chucks spill out and hit feet. /Ouch, I have tender feet like bananas.” Also featured are the Devil, Ellen Ripley, the Virgin Mary, LBJ, Darth Vader, Benedict Arnold, Captain Bligh, Princess Leia, Dick Cheney, the Road Runner and many others. You’ll also meet Nolan, the split foyer house who is under tremendous stress and Dina the Delta jet who wishes her passengers possessed more taste.

In your opinion, what makes a poorly written poem?
A lot of crappy poems are written because they don’t care about the reader; they’re so insular and specific to the author, the reader can’t find a way in. Many poems also don’t have any layering, they are filled with clichés (especially love poems talking about soul mates) and poems that don’t have any grounding. What I mean by grounding is that the poem is only concerned about the abstract and they’re nothing concrete to make a reader relate to it. Some poems also have a lot of “throat-clearing,” meaning the author takes a long time to get to the meat of the poem. Most of all I sincerely dislike poems that don’t trust the reader’s intelligence—they are expository and pander to the audience like a weak network sitcom.

How would you persuade a non-reader to read poetry?
Attend as many poetry readings/literary open mics as you can so you can experience the poem and the poet in the same space. If you can’t make it out to readings, watch poets read their work on YouTube and The Poetry Foundation. And while you’re at a reading, support the poets by buying their work. If you want to get really crazy and accelerate your poetry craft learning, review all of the poetry books you buy on GoodReads.com and Amazon. Even if you’re not a writer, I encourage you to read poetry to discover a fresh insight into an old idea or see how a poet performs acrobatics with his words. You just might learn something cool about yourself or the fellow drinking black coffee two tables over at the Panera.

Is poetry useful?
No question about it. Poetry teaches us how to live. Poetry is like the Windex on a grubby car window—it bares open the vulnerabilities of human beings so we can all relate to each other a little better.

Bonus Alice shares with us today a poem she wrote:

Chorus: The Hero of Acheron

Against our constant warnings,
You have five minutes to evacuate!
she descends in the elevator,
shedding her blue jacket, shedding her mind-killers–
always watchful with her duct-taped
pulse rifle and flame thrower to rescue
the girl, her Persephone from
the Queen of the Eggs.
This Demeter is something of an immortal–
while in cryo-sleep she outlived her Earth daughter
and once returned to her planet, chose
a space station’s safe orbit, refusing
to walk barefoot in the prairie grass
or view stars burning with death.

She brings her own star justice to the Queen’s eggs,
dripping with mucous as one hatches…
saving the girl before the pomegranates eat her.
Angels hum to the sulfured air.
The two rise to the unstable surface,
what was rage in her descent is now fear.
You have two minutes to evacuate!
This wounded goddess could lose everything;
she’s fighting gods with their own agendas–
before it was only her and her vengeance.
You have 30 seconds to evacuate!
The android Hermes flies
to mother and daughter before enfolding them
aboard the Sulaco as the dead world explodes.
The humans and near human flinch
to shock waves rising higher and higher
in the moon’s atmosphere.
But all we know Hades won’t let
Persephone ever truly leave
the underworld.
© “Chorus: The Hero of Acheron,” published in the Kakalak 2014 Anthology of Carolina Poets 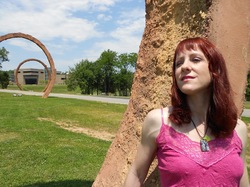 Alice Osborn’s past educational and work experience is unusually varied, and it now feeds her work as a poet, as well as an editor-for-hire and popular writing coach. In the past decade, Alice has taught classes and writing workshops to thousands of aspiring authors of nearly all ages from 9 to 90 both around the corner and internationally. Heroes without Capes will be her most recent collection of poetry; previous collections are After the Steaming Stops and Unfinished Projects. Alice is also the editor of the anthologies Tattoos and Creatures of Habitat, both from Main Street Rag. A North Carolina Writers’ Network board member and a Pushcart Prize nominee, her work has appeared in the News and Observer, The Broad River Review, The Pedestal Magazine, Soundings Review and in numerous journals and anthologies. When she’s not editing or writing, Alice is a competitive Irish dancer, and plays guitar and violin. She livesin Raleigh, North Carolina, with her husband, two children and four very messy and loud birds. Visit Alice’s website at www.aliceosborn.com. Or you can follow her on her other social media sites:Pinterest: http://pinterest.com/aliceosborn
Google Plus: https://plus.google.com/+AliceOsborn
Linkedin: http://www.linkedin.com/in/aliceosborn
Facebook: http://facebook.com/alicevosborn
Twitter: http://twitter.com/alice_osborn
YouTube: http://youtube.com/avosborn
Blog: https://aliceosborn.com/blog