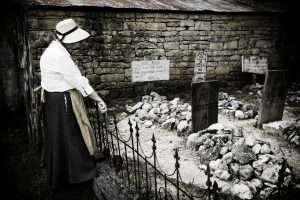 Based on the data we have from 13 states and New York City, plus China, Italy, and South Korea, more men than women are dying from Covid-19. The CDC hasn’t yet tracked the numbers for the entire U.S., but the limited data still tells us what many women already know: women are more likely to visit a doctor when they feel sick, they are more likely to wash their hands, and they’re fighting to get better soon because others depend on them. And in normal times, due to not having testosterone, women live an average of five years longer than men—they have fewer accidents and fewer instances of drug and alcohol-related deaths.

Women’s bodies are more likely to fight off infection because of estrogen and genes on the X chromosomes. Having two X chromosomes means double the fighting power than men’s single one. Unfortunately, this ability also makes more women than men suffer from the flu and auto-immune diseases.

Using their greater immune strength reserves, women are more easily able to fight Covid-19 before it puts its nasty talons deep into the lungs and renders poor blood oxygen levels on its victims. Yes, more studies must be done, but from what we can tally so far, Covid-19 positive men possess immune systems that work against their bodies.

A year after the Donner Party finally crossed the Sierra Nevada Mountains into Northern California, J. Quinn Thornton’s national best-seller, Oregon and California in 1848 stated more women than men survived the ill-fated Donner Party: 28 men died as opposed to eight women. Thornton didn’t unpack his discovery, leaving it to 21st century historians and scientists to list their theories. Having a better immune response could have definitely helped the Donner Party women survive starvation but needing fewer calories and having greater fat reserves thanks to pregnancy and childbirth also gave them more of a chance when food grew scarce. The men burned through so many calories on the journey because they became human bulldozers clearing almost the entire state of Utah; it’s no wonder their bodies were eating themselves from the inside out. Their testosterone didn’t help either. Before the Donner Party even arrived in the snow-covered mountains, two men were murdered, one man was abandoned (poor Hardcoop!), and another was accidentally shot to death.

Yet science and hormones don’t tell us the whole story. Many of the Donner Party men were single and not part of a family group—these men, mostly younger, were the first to die. Older men, as well as older women also died. All the women had a strong purpose: they had to keep their families alive to see the spring of 1847, but the younger ones did better. Like upping your chances of survival on the Titanic, being a twenty-something woman in the Donner Party was like being a woman possessing a first-class ticket.

Yet, we have an anomaly with our favorite reluctant cannibal, William Eddy, and his wife, Eleanor. Eddy was 29 and Eleanor was 25. She died and he lived when it should have been the other way around. My theory is that Eddy was that extroverted, intense, know-it-all, annoying, smart-ass person we all have in our lives who is a pain to be around in peace time, but when the shit hits the fan you need and want this person to lead you. He always looked for solutions and tried to MacGyver his way out of most situations—he had tenacity and drive and these traits made him try to return to his wife and kids a few weeks after his horrible ordeal of leading the Forlorn Hope party.

On the other hand, Eleanor was his complete opposite. I don’t understand what made their relationship work unless Eleanor was relieved she never had to do the talking when her husband was around. He was a good provider and she felt safe with him. And that’s the key. When he left her to co-lead the Forlorn Hope party she fell apart. She didn’t have the inner strength and nastiness to make it for him and her kids. Because it took nastiness to connive your way to get food for your kids from the Breens (those ten Breens in their snug cabin hoarding their frozen beef!) or Momma Graves. Note: if you’re asking who the hell are the Breens and the Graves—just wait. They’ll be the subject of future blog posts because they definitely intersect with William Eddy.

In his heart Eddy must have known Eleanor had given up when she snuck a hunk of grizzly bear meat in his backpack with the note, “Your own dear Eleanor.” That protein sacrifice on her part ended up giving him strength to see another day. She and their daughter died February 3, not long after Eddy successfully reached Johnson’s Ranch in late January 1847. This is purely my imagination, but I think that Eleanor was sexually and/or emotionally abused in her youth (not by Eddy!) and this shame and guilt made her believe she was unworthy and didn’t deserve to live. Surviving the Donner Party was as much a mental battle as a physical one.

It’s obvious we need more testing and more data in order to arrive at more definite answers about the effects of Covid-19 on women vs. men. But what we can state right now is if you love yourself and love those around you, you will do something when you’re sick. This applied to the Donner Party and it applies now during this pandemic. If you’re a guy, improve your chances of Covid-19 survival by listening to your body and get tested if you’ve lost your sense of smell, experience fever, shortness of breath, or body aches. Then quarantine yourself.

I’m sending peace and love to anyone who is going through Covid-19. We’re all in this together, so be like those snobby Breens and act like a family and take care of yourselves!

All Across the United States, The Coronavirus Is Killing More Men Than Women, Data Show by Chris Mooney, Sarah Kaplan, and Brady Dennis. The Washington Post, April 4, 2020.

The Best Land Under Heaven: The Donner Party in the Age of Manifest Destiny by Michael Wallis. (W.W. Norton & Company, 2017).